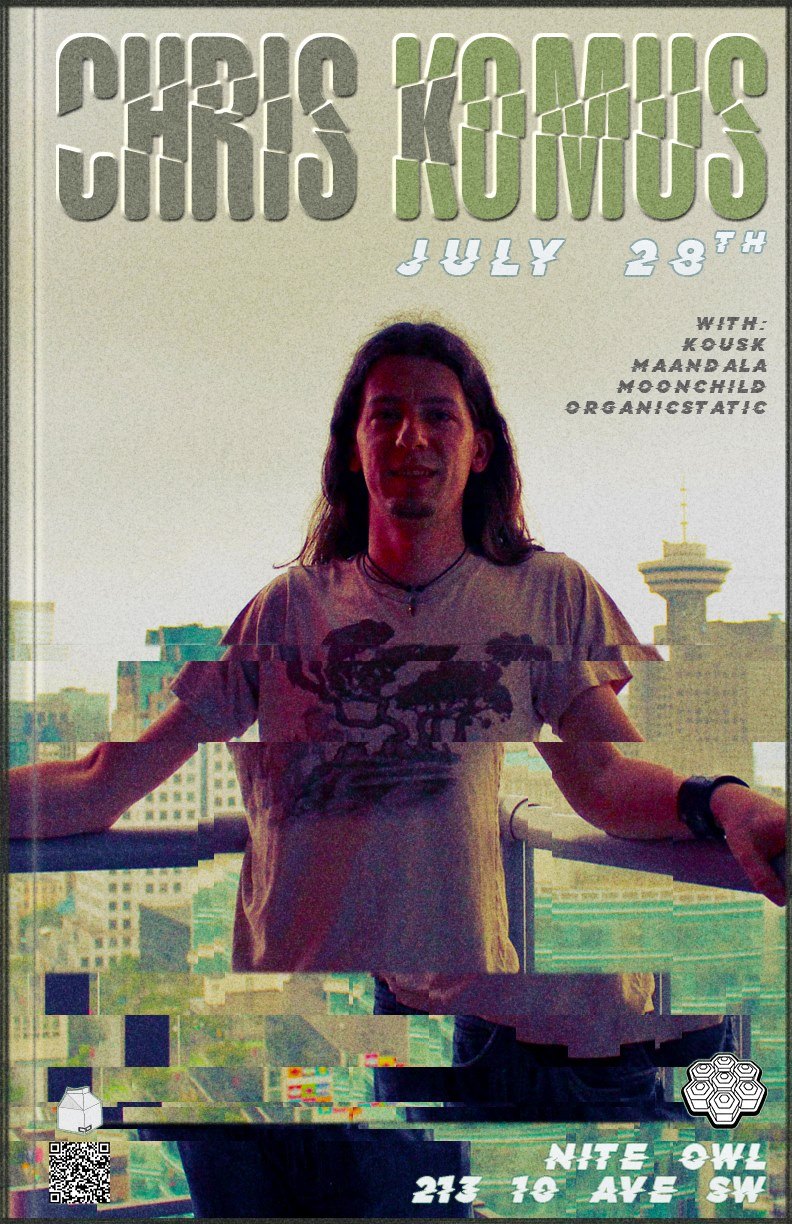 Join us July 28 for a night of tripped out, glitchy, earthy, moving sounds that will tantalize your senses through the power of the now 6 (SIX!) Tuba BT Sound System!! Come see what we have been working on all year! We are bringing it big for this one! Get your dancing shoes ready and come dressed in your festival best!

The very talented producer and DJ Chris Komus will be making the trek from Winnipeg to throw down his unique and awesome brand of psy-infused, dubby, glitchy, bass music!
Also joining us is recent Bass Coast headliner, KousK, bringing her deep and complex take on the bass music realm!
Moonchild willl also be gracing the decks bringing her awesome blend of sounds that we have come to know and love!
Our own Maandala and Organicstatic will be warming the decks 🙂

We will be bringing our full stage production with a taste of whats to come for our Motion Notion Turtle Island Stage. We will also have vendors TBA bringing some lovingly crafted goods!

$20 Tickets (Online or at Door)
Online – https://www.myshowpass.com/chris-komus-nite-owl-july-28/
*Share the event at checkout and save on service fees* 🙂

Traversing the world of psychedelic bass music, Chris Komus’s self-titled project is sculpted from the sounds of psydub, psybient, glitch hop, and world bass. Dubby vibes and laser-edited basslines are intertwined with futuristic psychedelic sounds, with each track telling a story like a cinematic score with orchestral elements and hints of space-rock and blues. Conjuring up visuals of a world within the swampy jungle floor, or the vastness of space between our sky and distant icy planets, but always remaining dialed in to the low-end frequencies of heavy hitting basslines that reverberate between the trees and the dancefloor.

Most recently for 2017, “Sickly Fingers” follows his previous EP “The Lioness” and is released on Shanti Planti. Other recent tracks appear on compilations from Shanti Planti (“Rhythm Code 2” and “Drift Theory”) and Street Ritual (“Global Glitch Vol 2”). Prior releases include “Chamber of Goonbags” on Black Tuna Recordings, “Laurentian Plateau” and “The Thrill” on Adapted Records, as well as two EPs with Enig’Matik Records, “Cordyceps” and “Everything Started to Go Apart”. Chris Komus has also contributed sound design samples on Twisted Tool’s plugin “Ultraloop”.

Chris Komus has had the honour of playing many festivals including: Boom Utopia (Portugal), Envision Festival (Costa Rica), Infrasound Festival (US), Shambhala Music Festival (Can), Burning Man (US), Motion Notion (Can) and many more, as well as a tour in Australian and performances in Costa Rica. He has also performed in cities across Canada and has made appearances in the US.

Kousk is a classically trained pianist, composer, producer and performer studying Music & Sonic Arts at the University of Calgary.
Inspired by the rainforest and dancing under the stars, she explores the psychological and emotional effects of music in creating environments of synchronized movement and growth. Unbound by genre, sound exploration is the vehicle by which new potentials of human consciousness are probed

Olds, Alberta is a quaint farming town juxtaposed by a major roadway that cuts through it, presenting the possibility of being able to, at any given moment, simply follow it until everything starts to change. It was her adventurous spirit that led her from the heartland of the country to the center of Western-Canada’s spiritually infused bass scene. Moonchild set out to explore the urban cultures of British Columbia and Alberta. She moved from city to city, staying long enough to discover something new, but never long enough to hinder her free spirit.
It was during one of these excursions that a friend brought Moonchild to a 403DNB powered Quincy’s party, the rolling basslines and 85bpm tempo shifted the course of her life. Thanks to her unwavering dedication to deep frequencies, bass music has sent her down a path that’s earned her spots at notable venues around the world. The same energy that plucked Moonchild from the humble roads of Central Alberta are still reaching for new borders; it appears the energy of bass music is drawing Moonchild back to its point of origin across the pond. With plans for International space travel its only a matter of manifestation.
She chose to follow this road, and everything is still changing. Armed with her fiercely independent attitude and charismatic personality, you will hear a diverse range of carefully selected music mixed with that gangster flair-body, mind and soul.